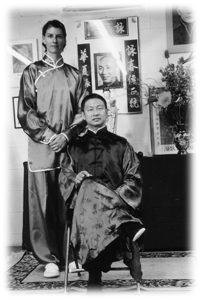 Viola Brumbaugh first met Master David Leung 17 years ago. Since that time, she has devoted herself to internal Chinese Martial Arts, particularly Tai Chi, Wing Chun & QiGong. She has traveled to China on numerous occasions and has had the privilege of training with and learning from some of the highest level living masters.